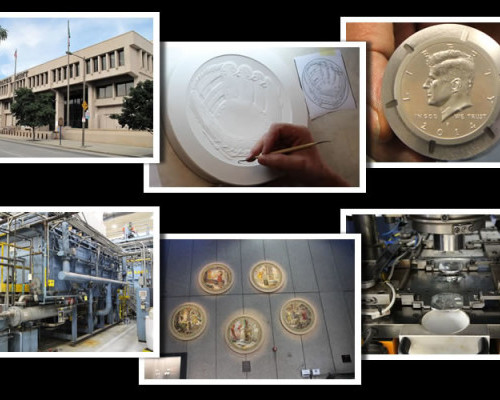 Touring the United States Mint is a fascinating experience for all ages and one to remember for a lifetime.  Tours cover the present state of coin manufacturing and the history of the Mint.  Visitors learn about the craftsmanship required at all stages of the minting process, from the original designs and sculptures to the actual striking of the coins. 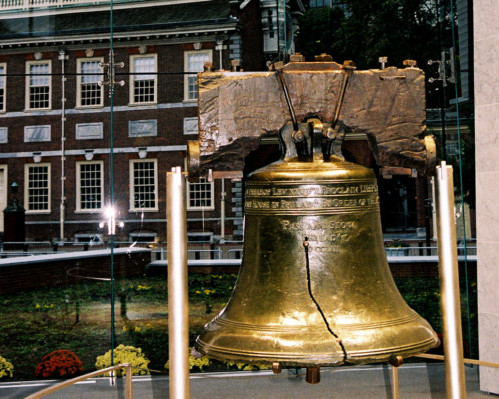 The Liberty Bell Pavilion houses the most important relic of American patriotism. The Liberty Bell, as it is called today, is named for its role in proclaiming liberty throughout American history. The bell was ordered to commemorate the 50th anniversary of Penn’s Charter, which established religious liberty in Pennsylvania. The Pennsylvania delegates had the verse Leviticus 25:10 placed on the bell. It declares, “proclaim LIBERTY throughout the land unto all the inhabitants thereof” (KJV). The bell cracked the very first time it was rung upon arriving in America from the Whitechapel foundry in London. It was broken down, melted and recast twice more before it was finally hung in the Pennsylvania State House. The Liberty Bell began to live up to its name on July 8, 1776 when it called Philadelphia together to hear the first public reading of the Declaration of Independence. 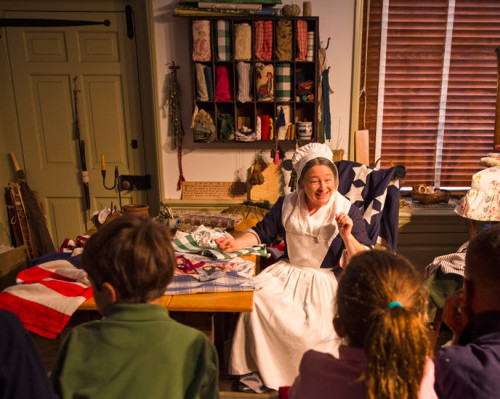 The well-known and loved story of Betsy Ross sewing the first Stars & Stripes is tightly woven into the colorful fabric of America’s rich history.  The Betsy Ross House, the birthplace of the American flag, is alive with the sights and sounds of the 18th century. Tour the house and then stay a while longer to learn more about Betsy and her exciting life and times through interactive, historical programming. 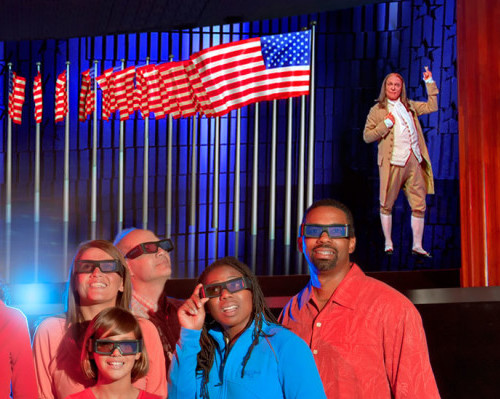 The Lights of Liberty Show

Freedom. Patriotism. Independence! Take an inspirational 3D journey through American symbols in this state-of-the-art show. Join virtual Ben Franklin and learn about the Liberty Bell, the American flag, the Great Seal, and more in the 360° PECO Theater that surrounds the audience. This 15-minute long experience is located inside the Historic Philadelphia Center, on 6th & Chestnut Streets just across from the Liberty Bell and Independence Hall. 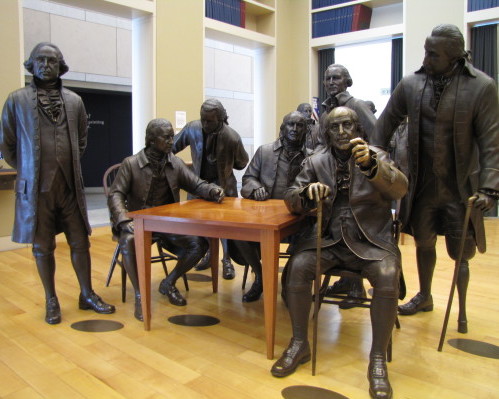 Students are sure to be inspired, informed, and engaged by their visit to the National Constitution Center—the Museum of ‘We the People’. The museum’s main exhibition includes three signature attractions. Freedom Rising is a multimedia theater-in-the-round performance connecting visitors in an inspiring, unforgettable way with the story of the United States Constitution and its ongoing role in our lives. The Story of We the People is a hands-on exhibition that illuminates America’s constitutional history through innovative exhibits, films, photographs, rare artifacts, and engaging activities led by the education staff. Singers’ Hall allows students to sign the Constitution alongside 42 life-size, bronze statues of the Founding Fathers. The National Constitution Center is an incredible experience for teachers and students alike. 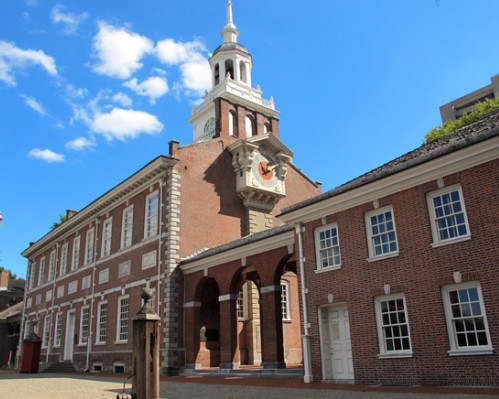 They risked everything — “their lives, their fortune and their sacred honor.” During the blistering summer of 1776, 56 courageous men gathered at the Pennsylvania State House and defied the King of England. Eleven years later, representatives from 12 states gathered to shape the U.S. Constitution, finally creating one unified nation. The guided tour of Independence Hall, led by National Park rangers, begins in the courtroom where lawyers from opposing sides shared tables and law books. George Washington’s “rising sun” chair dominates the Assembly Room, which is arranged as it was during the Constitutional Convention. In the adjacent West Wing, the original inkstand used to sign the Declaration and an original draft of the Constitution are displayed. 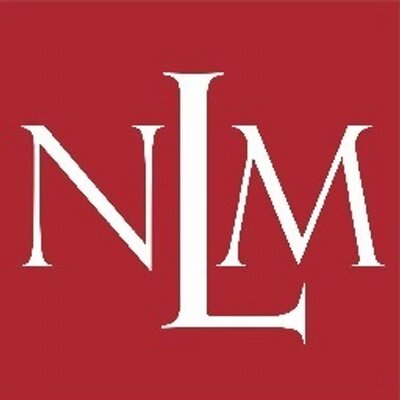 Located in the heart of historic Philadelphia, the National Liberty Museum is dedicated to preserving America’s heritage of freedom by fostering good character, civic responsibility and respect for all people. Visitors to the Museum take an inspirational walk through freedom, interacting with incredible stories of heroes and artwork that encourage them to find their own place in the story of liberty. Core themes for young people and adults include leadership and good character; diversity and inclusion; peaceful conflict resolution; and civic engagement.  The museum’s primary art form is glass art, as it supports their mission to promote non-violence and acceptance of others by showing visitors that freedom is “fragile,” like glass.  It also makes the point that liberty is essential for self-expression. 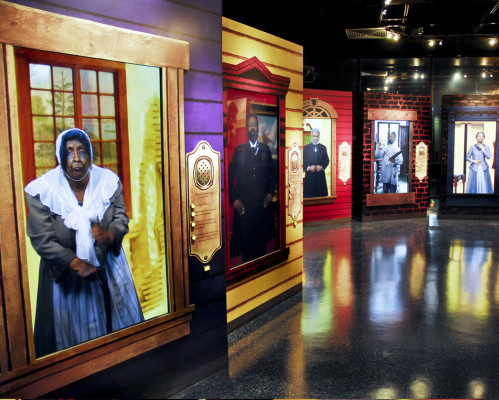 The African American Museum in Philadelphia is the first institution built by a major United States city to house and interpret the life and work of African Americans. Doors are open for the enjoyment and enlightenment of visitors five days a week. Visit and experience the richness and vibrancy of African American heritage in four magnificent exhibition galleries filled with exciting history and fascinating art. 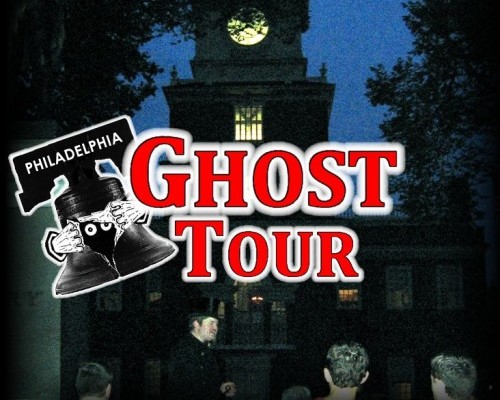 Join the Ghost Tour of Philadelphia for a candlelight stroll along the back streets and secret gardens of Independence Park, Society Hill, and Old City, where mysterious tales of ghostly spirits, haunted houses and eerie graveyards lurk in the night! 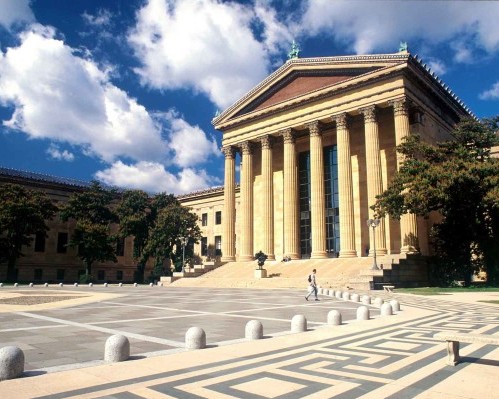 As one of the largest museums in the United States, the Philadelphia Museum of Art invites visitors from around the world to explore its renowned collections, acclaimed special exhibitions, and enriching programs, both in person and online.

Philadelphia is best known as the city of brotherly love and for its role in the American Revolutionary War as well as the place of the signing of the Declaration of Independence. Filled with historical remnants, Philadelphia is a great city to learn about history in a way that won’t feel like learning at all.

Let an experienced tour director guide you through some of the city’s famous and favorite attractions.

With many museum housing American historical artifacts, magnificent pieces of artwork and so much more, visits to the National Constitution Center, the National Liberty Museum, the Philadelphia Museum of Art, and the African American Museum offers an educational experience that rival none.

A visit to the US Mint will show where at least half of U.S. circulating coins and most of the commemorative medals are made, as well as early mint and coining equipment and some rare and historical coins.
Visit the international symbol for freedom, the Liberty Bell at the Liberty Bell Center where historical documents and graphic images give light to the facts and fables about the bell.

Stop by Independence Hall and see the place where the U.S. Constitution was shaped by representatives from 12 states to create one unified nation.
Visit the home of Betsy Ross, the woman who created and sewed the first American Flag. Watch history come to life with a performance of the Founding Fathers.

Visit the dark side of Philadelphia history with a ghost tour where fascinating tales of ghosts and gallows, graveyards and hangings will entertain even the most skeptical.

Included in your tour is a stay at a superb hotel close to all the action, which includes night security for that extra piece of mind. Experience great food and fine dining for breakfast and dinner at some of the Philadelphia’s finest restaurants.